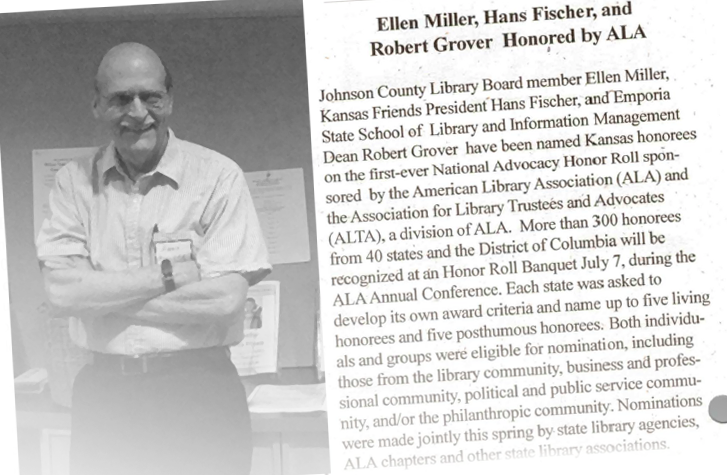 Last week, on August 27th 2020, Hans Fischer, with his wife by his side, passed away at his home in Lawrence.

In October ’98, former NEKLS system director, Jim Minges noted, in the Loose Change NEKLS newsletter, that libraries needed professional resources for the design of library buildings, and introduced the start of a new service. Jim wrote that Hans Fischer, the president of FoKL, would be available to assist libraries, at no cost to them, with site selection, space utilization/renovation, and creating building program statements. Many libraries across our region benefited from Hans’ expertise, and several hired Hans for extensive architectural design services–in these communities his legacy will continue on as the place we call the library.

“Hans married Iris L. Smith in 1988. He “retired” in 1990 and moved with Iris to Lawrence, where she had joined the University of Kansas faculty. Hans continued his architectural work in Kansas as a consultant. Most significantly, he focused on planning, design, and renovation of community libraries. In 1998, he began to provide services to communities in the Northeast Kansas Library System and over the next 15 years worked on more than 50 library projects in towns across Kansas. In 2006 the American Library Association named him as one of the state’s five top library advocates of the 20th century.”

We are reaching out to our library community to record memories of our local library advocate, and look forward to sharing them below.